Along time a ago while practicing AKC Rally Obedience for an up-coming dog show a friend and I had an idea that Rally exercises could be used to form a drill team!  Much much later that idea formed into a team!

Most of the people on the team had taken a Rally class from me, some even competed at the Rose City Classic on a Rally Team.  Others hadn’t done anything like this!  We practiced almost every Wednesday evening in Scappoose or St Helens, Oregon for a about 2 months.  Everybody helped either by taking pictures, sewing collars, loaning shirts, helping plan the routine, and/or music! 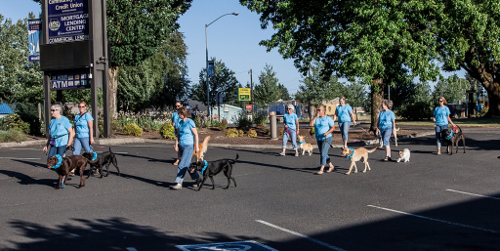 Again THANK YOU ALL for training your dogs and trying something new…it will made you better dog owners!!!

Hopefully we can all do it again next year!!!