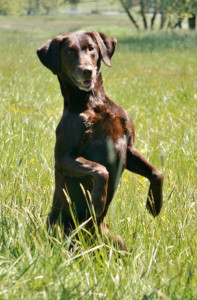 As Hemi my little brown dog runs at warp speed in the yard, in a way that can only be describe as a freak, it is almost surreal to think that only one month ago she was sick and in severe pain.  She was in her dog bed curled up quivering in pain, hot to the touch, and unrecognizable as my four year old hard charging Labrador!  My boyfriend (Max) and I could barely talk about her because both of us were in fear of her dying.  Nether of us wanted to say it out loud to upset the other one even more!  We slept on the floor with her for days.  My friends brought her get well toys that she didn’t touch.  I would give her her meds in the am go to the kennel, and come home and check on her.  When I got home I would hope more then anything that she would meet me at the door and jump on me but no.  I would have to go look for her passed out some where odd like the bathroom.  She wouldn’t even notice I was there!  I normally don’t write upsetting blogs.  I try and make my blogs fun or informative for others.  But this blog is for me because I have been so upset over Hemi I needed to tell me story.

It all starts (to my knowledge) in my Tuesday Agility class at Everything Canine.  I had asked Hemi my chocolate Labrador to jump through the tire jump and do the weave poles.  After just  those two obstacles the instructor and I noticed Hemi was not herself.   We stopped training for the evening.  Hemi definitely wasn’t herself but didn’t seem in pain.   We thought maybe she just needed adjusted? I scheduled her an appointment with the chiropractor, Dr. Mike from Hindsight Veterinary Care.  Dr. Mike adjusted Hemi (Thursday) and sent her home with instructions for her care for the weekend.  Dr. Mike said that by Monday Hemi should be improved.  Sadly on Monday Hemi was worse.  I called Dr. Mike and he told me to take her to my regular vet for X-rays 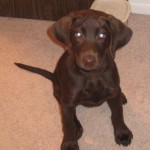 I called my regular vet Dr. Deb Christensen form Community Vet Clinic. I told them Hemi’s issues and that she needed X-rays.  Knowing Hemi they didn’t think that they would be able to take X-rays with out sedating her.  I sadly explained to them that she wasn’t Hemi 🙁  By this time Hemi had went from her crazy hard charging 4 year old dog self to looking like she was a 14 year old dog in pain!  Dr. Deb ran blood work and took multiple X-rays.  Hemi’s blood work was normal but Spondylosis was found in her spine.  Dr. Deb wasn’t sure that the Spondylosis was the cause of the pain and said, “I’ve seen way worse X-rays of dogs with Spondylosis in way less pain.”  Still not really knowing what was wrong with my little brown dog she was given a shot of pain killer.  Hemi just laid there on her dog bed on the vet clinic floor.  When Dr. Deb was giving Hemi her shot she looked like one of my beloved old dogs being put to sleep.  I was almost in tears!  I was sent home with more pain meds and muscle relaxants.  We still didn’t know what was wrong with Hemi but but at least she wasn’t in so much pain.  Hemi spent the next 3 days doped up on pain meds and I spent the next 3 days totally upset about her!  I could barely even talk about it to my concerned clients and friends who would check up on her. 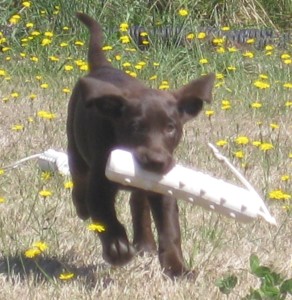 By Thursday Hemi hadn’t improved, but it was also hard to tell because I was giving her the muscle relaxants. I took her back to the vet.  Dr. Deb examined Hemi and took her temperature.  Because Hemi’s temperature had not dropped she was concerned and decided to put her on antibiotics.  She also mentioned an MRI if things didn’t improve.  Sad, I headed to the pharmacy to get Hemi her antibiotics.  While driving I wondered to myself if Hemi would ever be “Hemi” again?  After about 3 days of sleeping on the floor with with my little Hemi, stressing about MRIs, and Hemi taking her antibiotics she started to seem to be feeling better.  I took her off the muscle relaxants but continued the antibiotics and pain meds.  Hemi continued to improve!  By Monday she was starting to seem like herself so we (the vet and I) decided to wean her of her pain meds.

By the end of the week Hemi was back to her crazy self and we were trying to keep her calm (which is pretty hard).  After a few days Hemi was cleared to swim and go on leashed walks. Hemi went swimming for her first time in weeks in a clean heated pool at Wet Dog Wellness.  After getting acclimated to the pool water Hemi was VERY HAPPY to swim and exercise!  I was even more happy to have my dog back (or at least I thought I did)!  I worked to get Hemi back in shape.  I swam her, walked her on lead, and then finally light Hunt Test and Agility training.  She did GREAT for about 3 weeks or so. 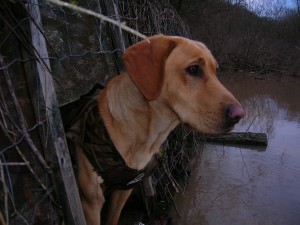 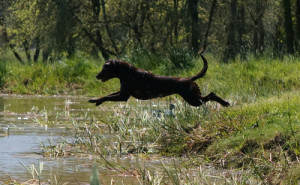 Then I started to notice that Hemi seemed a bit off.  She wasn’t doing some of her normal crazy brown dog things.  She wasn’t jumping on us when got home, running in circles in the back yard, and she was some what slow in agility class.  Things like Hemi jumping on me when I get home can be really annoying until…she doesn’t do it and you know something is wrong.  When Hemi was really sick I can’t tell you how much I wished she would meet me at the front door when I got home and jump all over me!  I thought maybe I was just being paranoid and Hemi had twisted something doing agility or I WAS JUST BEING PARANOID!  But like I said she was “off” and Max agreed.  I rested Hemi for a day or so and gave her some anti-inflammatories.  After a couple days she seemed the same, not sick like before, but still not herself.  I took her temperature (I should have done it the first day!) and it was 103.1 (Hemi’s normal is about 100.3).   Not wanting to believe she had a fever I then took her temp with another thermometer, it was still high!  I called my vet again!  I told her that Hemi had a temperature and was not acting herself.  She suggested putting her back on antibiotics and bringing her back in for an x-ray to see if her Spondylosis had changed in the month since we took her pervious X-ray. 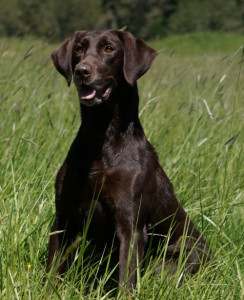 I took Hemi to the vet knowing something was wrong but happy that she was not in as much pain as before.  We took x-rays and her Spondylosis looked the same which was good.  But Hemi still had a temperature!  Dr. Deb told me to put her back on antibiotics.  She was also going to consult with a specialist and we would talk again…  A couple days later Hemi is herself and I am getting jumped on…yea!  Then my vet called.  After consulting with the specialist, it was decided that Hemi should see a Neurologist and possibly get a CAT Scan.

Now I will try my best to tell you why…  Because Hemi’s Spondylosis is so localized (usually when dogs have it is in their whole spine) and she is so young to even have Spondylosis they are worried there is something else going on in her to cause the infection.  They are worried the Spondylosis is more of a “symptom” then the main issue.  The only way to really know what is going on with Hemi is to  get a CAT Scan.  So, on Tuesday I will be going to see Dr. Skinner, a Neurologist at Oregon Veterinary Specialist Hospital for an exam to see what he suggests we do with Hemi.  While I don’t want to spend the money for a CAT Scan, $1800-$2200, I do want to know what it wrong her and fix it!  Please think good thoughts about my little dog I love so much!  I will update this blog after talking to Dr Skinner.